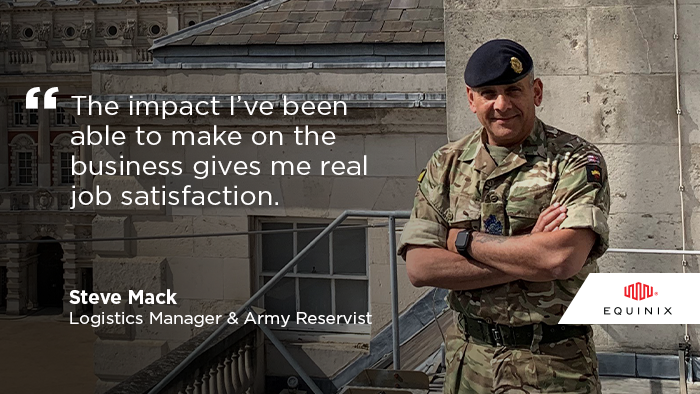 From the Army To Equinix

Having joined the Army at 16 years old and serving for 27 years in a variety of countries I began my second career at Equinix. I held a variety of senior Logistics positions in my Military career, meaning that I oversaw the logistics of everything from transport to weapons, vehicle parts and clothing.

It was a logical move to join the Equinix team as a Logistics Manager in July 2014, as I found my skillset from the Army was extremely transferable. What I didn’t expect was to be able to grow my team from four to 16 over the course of six years, and Equinix to become the highlight of my career.

The first reason for this is the impact I feel I’ve been able to make on the business, which gives me real job satisfaction. One of my first projects was to centralise all consumables into a one hub so that any ordering went via my department, the second task was to set up a system where I could track the usage of all consumables. This ensured I had the correct equipment in the right place at the right time which is crucial in data centre where our customers rely on us 24/7.

Three years ago I was given the opportunity to go to California to present an idea I had for a company ‘Sparkathon’ event, which was an app called ‘Where’s My Shipment?’ This gave customers real time notifications of where their orders were, and allowed our Logistics and technicians teams to see where everything was without having to return to their PC all the time. Presenting my plan to the Global leadership team was nerve wracking to say the least – I took some English ales and English port over to the USA with me to make sure I caught their attention!

They loved my idea which was sponsored by Equinix leadership and rolled out globally, so now this app is used in every country Equinix operates in. I was absolutely elated when we launched this – it was an amazing feeling to have made the idea a reality and saved our staff and customers a huge amount of time in the process. There is nothing better than receiving an email from a customer saying how great our set up is, and how organised we are. Seeing ‘The Magic of Equinix’ that we talk about internally impacting our customers is fantastic.

Making a genuine difference is what motivates me, and so being able to continue my Military career as a reservist while working at Equinix another key reason I enjoy working here so much. The company’s support of the armed forces is second to none, and the recent Armed Forces Covenant Gold Award we won from the MoD is testament to this. Within my team of 16, two of us work as reservists and another is a cadet instructor. We learn new skills every day at work to take to our military work, and we also bring a unique set of skills to the business, so it benefits the company as well as their employees.

I really enjoy my work as a reservist and Equinix is fully supportive of me taking time off to contribute. So far I’ve been called up twice and I’m just about to do my third stint this year, as there is a huge amount of demand for additional military support during the COVID pandemic.

In my first two week-long deployment, I was working in Horse guards in London helping to assist running the operations room in London district for the Joint Military Command (JMC), which involved a variety of taskings from planning, manning London drive through COVID19 testing centres, large scale logistics support to NHS England, Engineer support to Nightingale hospitals and public order in and around London. You get to work with a wide range of people from different backgrounds so are learning from each other all the time. Some are Ex-soldiers, but there are also civil servants, lawyers etc – a huge range, so it’s different and interesting each time. It’s a great feeling to be contributing and nice to get my uniform once again!

Our military programme is ever evolving here at Equinix as we create more opportunities for people looking for their next career move after leaving the Armed Forces. It’s fantastic that we are able to work so closely with the armed forces to support people when they leave with a huge diversity of careers.